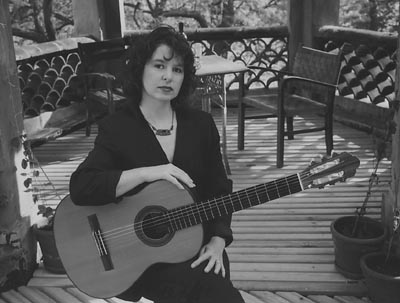 Parallel to her guitar training, she studied composition with L. Scharpf and Prof. Dr. H. Fladt in Berlin and attended composition courses with Leo Brouwer and Frangis Ali-Sade. She received her Dr. phil. degree with a musical-analytical thesis at the UdK-Berlin.

As a soloist and chamber musician she gives concerts at home and abroad.

In 2002 she was awarded the prize of the city of Mannheim for her wind sextet “music for six” at the XII. International competition for female composers.

Award at the IX.Torneo Internazionale di Musica in Weimar with the actress Marjam Azemoun for “Platero y yo” by Mario Castelnuovo-Tedesco.

2005 Publication of the Early French Songs by Fanny Hensel born Mendelssohn as first edition with piano and as arrangement by Furore-Verlag Kassel. In October 2005 premiere of the adapted version at the Konzerthaus Berlin.
2008 CD release of Early French Songs with singer Anne-Lisa Nathan on ARS (Distribution Note1).